Summer solstice 2013 has come and gone and so it should be sunny and warm. But so far it has been cool and gray much of the time. But we are in a rain forest and it could be worse as Alberta has discovered this week with extraordinary flooding. Climate change at work? Who knows, but it is over 40 C in Turkey where Dick is now.

It is probably a good thing for me that it is not hot and sunny. I do have radiation "burns" but they are not nearly as bad as many women experience and I suspect that within a few days, they will start to peel. Apparently the areas radiated will be sensitive to sun forever so I will have to be more diligent in the future with sunscreen and covering up. My last blast of radiation was right on schedule June 14.

Unless another cancer presents itself, I am done with chemotherapy and radiation. I saw my medical oncologist on Thursday and will not see her again until January, 2014. I see my breast surgeon one more time next month and the same with the radiation oncologist. I also see the plastic surgeon in July one month post radiation just to make sure my "foob" (fake boob) with its tissue expander still looks OK. I also have a CT scan in July for my left lung to check that the 7 mm nodule that presented on my first CT scan pre chemotherapy has not changed.

As for the tissue expander, it is not particularly comfortable. Imagine a blow up device placed behind the pectoral muscle in your chest which over the course of several weeks post mastectomy was filled with saline. When my elbow hits this foreign mass it feels just plain weird. My range of motion is good thanks to yoga  and during my weekly physio appointments, Paolo my amazing therapist, works to keep scar tissue at a minimum. Right now the axilla area which was bombarded during radiation, is very tight but he was careful this week as that last thing we want is for the skin to open up. Lymphedema is still a real fear, having had 14 lymph nodes removed and any entry point for bacteria could be dangerous as could insect or wasp stings. But the yoga and daily 5K+ walks apparently create lots of deep breathing which help to keep the lymphatic channels working.

So how do I feel? I feel better every day. The fatigue from radiation that I expected is real but for me it occurs most of the time at the end of the day and I am so tired that for the first time since diagnosis I am sleeping well. Just after radiation started, I began an 8 week Mindfulness-Based Stress Reduction (MBSR) course at the cancer agency. Yesterday we had an all day retreat and Tuesday will be our last 2 hour session. Since anyone interested can Google it, I will not attempt to explain how it works other than to say that for me it has been a real bonus. Over the past several years I have taken a few meditation courses but somehow the timing for this course could not have come at a better time. It has given me new tools to practice with and a way to look at the impermanence of thoughts, pleasant, unpleasant or neutral. I will be OK no matter what happens.

In addition, several months ago I got a fast track referral from my oncologist to the Compassion Club in Vancouver with symptoms of depression, anorexia, and insomnia. Yikes, to look back to how I felt then and to how I feel now is quite amazing. I know now that post chemo and surgery can be a tough, even dangerous time mentally. Sure there is physical healing going on but the mind also needs healing. Anyway, I wanted to check out the options offered at the Compassion Club which also has a Wellness Center attached. For me, that center has been another godsend. I have energy healing sessions every other week and just yesterday came off the wait list for acupuncture and July 5 will have treatments on alternate weeks. I have gained all of my pre diagnosis weight and though my taste buds are still not what they were and I still have neuropathy in my toes, I am well on my way to recovery.

As planned, Dick left June 17 for Turkey on the first leg of his sailing adventure. He will be working hard installing a water make and other needed preparation for ocean passages on our catamaran, Van Kedisi. He hopes to depart Bodrum on July 19, his 67th birthday along with our old friend and fellow ex Aramcon, Dean French. Marie French will join them in Greece by the end of July. I hope to join Dick in the fall for a few weeks but know that 40C Mediterranean weather would not be kind to me right now.

My goal of the Annapurna Base Camp trek for March, 2014 will become a reality. Already there are several committed trekkers including my sister-in-law from NZ and her partner. They figure that if I can do it post cancer treatment then they would be "wimps" not to come along.

As always, our family continues to enjoy adventures in life. Mary will join Dick for a leg of the sailing adventure in September. Steven plans to finish his degree at UVic in December in time to join Dick in the Caribbean if all goes well. Andy continues his "Right to Play" fund raising and has now chalked up 75 Olympic triathlons this year so far. http://righttoplay.akaraisin.com/pledge/Participant/Home.aspx?seid=2962&mid=9&pid=1206565

The weekend before Dick's departure we had a BBQ here and I managed to get a photo of all five of us  together. Who knows when we will all be in one place again? 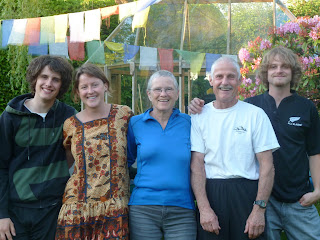 Posted by Marian Leighton at 10:47 AM