Radiation and a new vocabulary...

Spring has finally appeared. It is sunny and warm and the forecast is for a few more day of the same. Mary hit the beach yesterday then came by to cut a few more squares for her first ever quilt. Steven mowed the lawn this morning and Dick is enjoying fine weather on Bainbridge Island near Seattle. He is staying with our very old friend Chris whose wife died from inflammatory breast cancer several years ago. He is working out how to pack the water maker he bought for our boat in order to take it as baggage when he flies to Turkey June 17. I was unable to go as I had just taken my old passport in for renewal when Dick found that West Marine in Blaine, Wa. had several other parts, all to do with emergency at sea~~AIS, EPIRB and radar reflector ready for pickup.

At last I am feeling more myself and just in time for radiation to finally begin. I still have lingering effects from chemotherapy and my medical oncologist says this is normal though I do hope that they go away completely at some point. I am back on the aromatase inhibitors which will increase my insurance against recurrence considerably. I am to keep a journal to track side effects. So far no nausea as earlier but already night sweats are becoming regular so I may have to adjust the timing. Since osteoporosis is the worst offender I am happy that I am still walking my 5 k daily along with yoga which I hope will help to ward off that possibility.

Finally radiation is to begin. The CT mapping/simulation took place April 23 after my plastic surgeon added one more fill to my tissue expander. The "foob" or fake boob is now bigger and higher than the real one so I am decidedly lopsided though it seems that I am the only one who notices. I guess most people are too polite to stare long enough to see the difference. I walked to the river early last evening and did not wear a head covering. Again, it may be that no one notices but I do feel slightly uncomfortable when I pass other walkers and make eye contact. My hair is growing, but very slowly.

But back to radiation. It has its own language and the actual planning is done by a physicist and a radiation oncologist. The basic unit of radiation is called a Gray. The average amount of radiation received during a chest X-ray is 0.005 Gray and during a mammogram 0.003 Gray. I will receive 50 Gray or more over the course of 28 treatments. I already know that as usual, I get the "whole meal deal" due to the fact that there was extensive lymph involvement. There are lymph nodes above the clavicle and since I still had one cancerous node removed in the latest surgery, it is entirely possible that some of the "supraclavicular" nodes are also positive. Apparently chemo does not always kill what it is supposed to. So I will have radiation from and including my breast bone, the full breast and axillary area under my armpit and above the clavicle to half way up my neck.

I have lots of new handouts on what to expect, what to wear, what to use to moisturize several times a day, no sun exposure and so on. If all goes according to plan (nothing so far has quite done that) I will start radiation Tuesday and complete my 28 treatments on June 14, just in time to celebrate with Dick as he heads off to Turkey from Seattle on June 17. I also start a Mindfulness course this Tuesday and that entails 8 sessions plus an all day event. I have been on a waitlist since January for that course which also takes place at the cancer agency. I think that the timing may be just what I need and I look forward to meeting some women also going through treatment. There is nothing like spending time with women  who share the crazy roller coaster ride of breast cancer. I had lunch on Easter weekend with 3 other survivors who had been virtual friends via a breast cancer internet site prior to our meeting and it really was wonderful to be able to share our stories.

Although it has been my intention all along, I finally put together an itinerary for next spring that I think of as both a goal and a reward:

I know that for me, it is ambitious but I hope that others take the opportunity, regardless of whether they  are a breast cancer survivor or not, to consider the challenge of trekking in Nepal next spring. Annapurna Base Camp, 2011
Photo by Marian 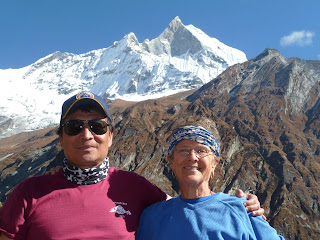