Well, spring in Vancouver is an up and down thing, just as my life with breast cancer is. Two days ago it was sunny with bright blues skies and the hope of real warmth soon to come. Yesterday that all changed to almost freezing rain and today it is just cloudy. Kind of how I feel; mixed emotions and often cold and cloudy thoughts with the occasional warm surge of optimism. I will not sugar coat how bad the past month has been. It has been down right depressing again with that trapped feeling of how am I going to get out of this.

In the 4 day week prior to Easter, I had six appointments, three of them with doctors, two different physio sessions and one appointment with a counsellor at the cancer agency. I saw my medical oncologist who I had not seen for 2 months, just prior to my last chemo session in January. I now consider this ridiculous. To see your primary cancer doctor every two weeks for four months and then not for two months does not make sense to me and I will state that when I see her next. Anyway, back to the actual appointment; first I saw a resident who I was not prepared to explain my sad and sorry tale to but did allow her to examine me and answer a few questions. I must have appeared pretty pathetic because soon after a nice older nurse appeared to ask me more questions. By the time my oncologist appeared, tears were slowly falling and all I could do was try to explain how terrible I felt, physically and mentally.

Looking back on the past six months, I realize that I saw her every other week during chemo but for very short periods and since I had been coping reasonably well in her eyes anyway, there seemed to be need for longer conversations. I recall my last appt. with her in late January and it could not have been longer than five minutes. I sort of recall trying to explain my mild signs of neuropathy while saying that I was still walking often and had even snowshoed that week. I guess that she heard good news without noticing any bad and other than my hospitalization in December, I suppose she thought I was coping well. Well, she did take note at this last appointment and was concerned.

I have mentioned before, how lonely this breast cancer journey is. While we see our primary cancer doctors for a few minutes each appointment, we think about our breast cancer constantly and have many questions that are impossible to expect answers from in those short meetings. So we share experiences and questions with virtual friends online, talk to friends who have had breast cancer, read books and articles and try to become as educated as possible as each treatment or surgery comes along. But ultimately, we are alone with our thoughts.

Whether those thoughts are helpful or not is a moot point. It is not always easy or possible to remain positive. In my case I tried to stay upbeat by continuing my almost daily 5 k walks and my yoga classes (which were disallowed after surgery for several weeks). Eating well fell off after surgery as I suffered from nausea and vomiting initially. My taste buds affected by chemo are still not normal and so I have been eating to live rather than living to eat, thus I have lost weight again. But depressed as I have felt the good news is that I did keep walking most days and have rarely stayed in bed.

In that week of many appointments, I also saw my breast surgeon who did the mastectomy and axillary dissection part of my March surgery. She went over my pathology with me though since then I have asked for some further information from the pathologist. What it does show is that 6 more lymph nodes were removed along with my breast and one was positive for cancer. It had become what is called extra nodal so the metastatic breast ductal adenocarcinoma extended into the fat. So now my stats are 7/14 lymph nodes positive for cancer. My chances of getting lymphadema are now higher and with radiation will go to 20%.

I also saw the plastic surgeon that week for my second fill of 60 cc into the tissue expander under my pectoral muscle. He decided he wanted to do one more fill which meant putting off the radiation CT simulation. I had that fill the following week but by then part of the incision was separating and so this week a section of my incision was excised as part of it had become necrotic. In reading the original operative report I noted that the SPY machine showed a large area of compromised blood flow to part of the mastectomy flap but after SPY was used again, "all tissues appeared to be viable." Apparently not says the plastic surgeon this week. SPY measures blood flow and is the only such machine in use so far in Canada and UBC only started using it in January. My surgeons did not quite believe SPY and so I was a bit of a guinea pig. Oh well, someone has to be!

The plastic surgeon also had to remove the last "fill" of saline put in last week as he said it would be counter productive to try to close a wound with a full tissue expander underneath. Also he said that normally he would not be doing the fills so fast but again, the radiation gang want to get their hands on me. At one point a few months ago, there was a lot of discussion about "windows" between chemo and radiation or surgery and so on. Of course we patients worry about these windows because the bad old cancer cells lurking and waiting for an opportunity might take the window route while no one is looking or treating.  But I have not seen the radiation oncologist since December and only communicate via phone calls to postpone treatment as we wait for my incision to heal and my new boob to fill up with saline. When I saw my medical oncologist in March and she seemed OK then about the time sequencing.  Given what a basket case I was, I honestly don't think she was worrying about lurking cancer cells.

So next week I get another "fill" and April 22 I will have the CT simulation for radiation. Maybe. After all it has been postponed twice already. I still have the after effects of chemo. My taste buds are still not back to any real extent which means that the post surgical weight loss has been tough to gain back. My toes remain numb from neuropathy. My fingernails have little odd coloured craters in them. But I do have some hair~~about 1/8 inch of length and my eyelashes are also growing.

I used my new iPhone in the garden this week to try to take my own photo. In most of them I just felt so old looking. I suppose these many months of aggressive treatment have aged me but I think the weight loss too has accentuated the many fine wrinkles I see in my face and on my neck. But I have to see this as the new me and like what I see in order to move forward so I actually uploaded one of those photos to Facebook. This is it with one of our cats Jake, also in it. Both cats have been with me throughout in a way only cats can be. Flobi is curled up right beside me now and Jake is not far away. 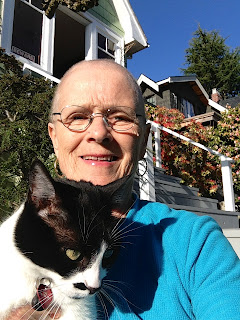 For an update on Dick and the crossing of the Med and then the Atlantic, it is a "go." He has crew for all legs and leaves for Turkey June 17. I am not sure what I will do once radiation is done as for me it is  still one day at a time but it will involve hiking and yoga and maybe a couple of weeks on Van Kedisi in the Med if I am fit enough. Dates have now been set for a 2014 Nepal adventure including a trek to Annapurna Base Camp. March 22 to April 10 are the dates so if any of you are interested let me know. When I finally decided this week to take concrete steps for the timing, I knew that I was on the way back up. For those of you who have already expressed interest, an itinerary/costs will be coming your way soon. I have thought about calling it "Marian's Inaugural Breast Cancer Survivor Nepal Trek" but it seems a bit unwieldy. Ideas are welcome!

Posted by Marian Leighton at 3:26 PM