Summer did finally come to Vancouver and it has been sunny for most of the past 10 days. Dick left 3 weeks ago today and I am slowly getting around to housework which I so successfully put off. I spend time in the garden but can never hope to keep up with the weeds. However I started harvesting my garlic crop yesterday and we have been eating salads from the veggie garden daily so it has not all gone to weed. We have several "volunteers" from the compost we spread in different parts of the garden and it looks as though we will have enough zucchini for the whole neighbourhood. I was kind of hoping for pumpkins but so far it does not look good for them. We finally got word that we will soon have our own chickens. Andy and I have visited our chicks twice recently at KJM Gardens and they are growing fast. We should have them ensconced in the deluxe chicken coop Dick built last fall by the end of the month, once they are sexed and found to be pullets not roosters. I am taking a course on chicken care on Saturday at KJM and we are excited about our newest "pets." I hope our cats Jake and Flobi like them too.

This morning I saw my breast surgeon for the last time. She discharged me fully to my GP. We both hope that I will not have to see her ever again, much as I did like her and her amazing surgical skills. I had a CT scan Friday to rule out any growth of a lung nodule seen last fall on the initial CT done to rule out metastases before chemo started. It was stable and just to be sure, a repeat will be done in a year. I have a mammogram next week for my left breast only, now that I only have one real breast. I see the plastic surgeon also that week as a follow up on the state of my tissue expander following radiation. It seems fine to me and to Paolo, my physio so I expect he will tentatively schedule my surgery for the exchange to an implant for late fall. Then I see the radiation oncologist the following week and fully expect him to discharge me forever too. My next appointment with my medical oncologist is not until January 9, 2014. I will continue to see Paolo as it is so important to break up any scar tissue that tries to form around my breast and axilla area.

I just did a count of appointments since July 18, 2012 when I found the lump. That count is 144 and does include physio and mindfulness classes along with all the cancer appointments but excludes the two surgeries and home care nurse appointments following my mastectomy. It all seems incredible but then a year ago I would never have expected to find a lump either.

Other than feeling that I have a "frog in my throat" and some peeling around the radiation sites I seem to have come through that last phase of treatments reasonably well. I am still very tired at night and the insomnia is back though not nearly to the degree it was during the rest of the treatments. It is often the night sweats that wake me but there is nothing to be done about that since the Anastrozole I take daily to block estrogen is so important. In our mindfulness course we were taught breathing exercises and I am finding them useful during at night in order to get back to sleep. I have one more prescription for Ativan but will not take it unless I really need it. I do recognize the need for adequate sleep though and am mindfully trying to slow down when I get tired and just "chill." Yesterday I even had a cat nap which is so unlike me.

Physically I am nowhere back to normal but think that I have already come a long way. Yoga and all those walks during the past year (not to mention the fact that I had just trekked to LoMonthang in Nepal two months prior to diagnosis) have stood me in good stead and I have been able to ramp it up in recent weeks. Andy the triathlon boy has become my coach as I prepare to do a short course triathlon July 28 at UBC. He walks with me often as part of his 10 k run and I have added cycling. I really notice the muscle wasting that took place especially my thighs during those long months of treatment when I could not or did not want to eat enough. I have gained lots of weight back and slowly the cycling will improve. I swam on Saturday for the first time in ages with Karalee Greer, who will be my triathlon partner. The course is 400 meters of swimming, 11 k cycling and a 5 k run which I will walk given that I cannot run even at the best of times. July 28 will be 366 days after my diagnosis of breast cancer and I can think of nothing better than doing my first ever triathlon wearing the t-shirt I have ordered which says "FUCK CANCER." They also come with little pink ribbons through the U but I choose to say it like I want to, and too bad if anyone takes offence!

The mindfulness course I took at the cancer agency ended two weeks ago and I hope to carry on with practice. One of our teachers quoted from a book but my chemo brain is still ongoing and I can't remember who to attribute the quote to. However I really do remember the substance of his three suggestions that he thinks would make the world a better place. They are simple but make much sense and I am mindfully practising them whenever I think to do so. I should not be judgmental, I should not be controlling and last but not least, I do not need to be right.

10 days ago, the 28 year old daughter of very good friends died of sudden cardiac arrest linked to high anxiety. She had been practising much of what I have been learning, but in a Buddhist Monastery in Thailand that she lived across the street from. She was a beautiful and wise young woman and I believe that she is at peace though the tragedy has brought much grief to her loving parents and sister who was her soul mate and best friend. It certainly made put my own breast cancer in perspective. Yes, it has been a rough year but here I am.  I find that I am slowly beginning to fathom the impermanence of not just our thoughts but also of our lives. She touched many people in her young life and if we all practice more compassion as she did, then of course the world will be a better place. I listened to a short address HH the Dalai Lama gave yesterday on the occasion of his 78th birthday and the gift he wished for the most was that we all practice compassion. 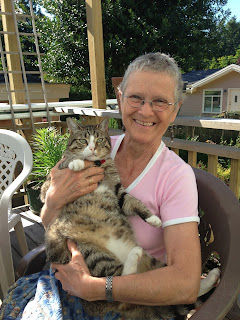 Posted by Marian Leighton at 3:08 PM