So far this year I have been trying to keep up with the Van Kedisi blog. Many of you know that my husband Dick sailed from Bodrum, Turkey to the Barbados with different crew in 2013 when I was recovering from all the breast cancer treatments and surgeries. This year he has been heading west since January 29 from Curacou to the Panama Canal with friends. I am actually checking a web cam that supposedly shows them transmitting but the resolution is not big but I will keep checking as I write. That blog link is: https://sailvankedisi.wordpress.com/author/sailvankedisi/
The crew is changing with the friends who did the first leg departing tomorrow and the new crew, already on board heading across the Pacific.

On to my own blog~~I have not written since October but I would like to explain why I am not crossing the Pacific myself on Van Kedisi. Breast cancer can, even three years post mastectomy and chemotherapy (radiation ended in June, 2013) can still present challenges. Since diagnosis, I have made decisions about open ocean sailing for myself based on BC. Perhaps if I had started out with Dick from Turkey in the spring of 2013, I would have appreciated a different adventurous challenge. Since that was impossible at the time and there has been ongoing treatment and the medical protocols that go along with my type of cancer, it is not as if I can just take off. No doubt I could have planned my medical schedule to cross the Caribbean but somehow I felt I wanted to be on terra firma at least  for now. One of my good friends and I plan to fly to Tahiti in June to spend a couple of weeks on VK and I know there is still an option to sail from Fiji to New Zealand. Our son Steven plans to sail from Tahiti to NZ and our other two kids have already done legs~~Mary from Mallorca to the Canary Islands and Andy crossed the Atlantic.

As it has turned out, I have appreciated the opportunity to be on my own and in fact have found it really satisfying in many ways. It has been a very long time since I have had so much time to do what I want whenever I want to and to spend time with old friends and some new ones too. It has given me time to journal and explore not just each day as it comes along but to think about my life in the past, present and future. I was surprised to find how liberating that has been and continues to be.

Having the opportunity last summer to do the 7 week "one on one" Mindfulness Based Cognitive Therapy course at the cancer agency gave me new tools to work with. I learned that I do not have to erase sad or anxiety driven thoughts from the past but I can relegate them to the past when they come into my mind. They do not define who I am now. This liberation has made me much more aware of how much sadness but also joy there is in the world and we can choose to view events in our life differently if we want to. Reaching out to others is healthy and beneficial for me but also for others I interact with allowing a greater appreciation of both people I already know but also for strangers I approach say at yoga, or on the bus or while walking down a main street.

I am feeling positive even though the drugs I take to keep recurrence at bay have those pesky side effects I have referred to before. The cording in my axilla area persisted and by December there was a new one, large and tight, along with the other twinned ones. I sent a plea for advice to my medical oncologist and got a referral back to my breast surgeon who I saw in early January. She thought it was likely a capsular contracture of the breast implant. I made an appt. to see my plastic surgeon but there was a two month wait. Meanwhile I also sent out emails for advice and was lucky to get an appt. with a registered massage therapist who specializes in post breast cancer treatment as well as pre and post natal women and her practice is in a midwifery center so always pleasant to visit. I was fortunate that she took me and then only because one of my BC buddies told her what it looked like. I have now seen her 4 times in the past two months and it is like a miracle. With myofascial release the big one has disappeared and the other two are softening.

While at my late fall medical oncology appt., I mentioned that I was having a lot of pain in my low back area. The bone density test from the summer showed further osteopenia but she wanted a bone scan done to rule out metastases. The one thing about having had cancer is that often we are booked sooner than later and I had the results just before the NY. The results were good in that no further cancer but the degeneration and osteoarthritis looked worse. I saw an endocrinologist who specializes in bone disease in January and they do their own bone density test. It was a very thorough visit and the end result was a decision to start on yet another drug called Prolia or Denosumab which is given subcutaneously twice a year. It is a monoclonal antibody and will not go into detail but suffice it to say that it should help the bone loss caused by Anastrozole, the drug I take against recurrence and which blocks estrogen, thus the osteoarthritis. The best news is that at the San Antonio breast cancer conference in December of 2015, a 5 year study shows that this drug may in fact also protect us against recurrence. Time will tell.

As always, exercise is the best remedy for everything, at least in my estimation. It also creates those endorphins to make us feel better! Yoga also works and so I feel good, take the meds knowing that they do have side effects but also may just protect me from much worse.

I am off to the Netherlands in a week for a 10 day holiday. It is hard to believe, but I will be meeting up with 6 friends from our Aramco days, all British though one lives in Delft. I will not see them all at once but some in Amsterdam and some in Delft. I had KLM points to burn and though most people are heading for the sun, I am excited to see the Netherlands in early spring~~daffodils, tulips and old friends~~what could be better! Life really is good andI look forward to more of 2016. I feel fortunate, that is for sure.

Lori, who lives in our basement suite, reminded me that I did not mention our chickens. I now have 5 young hens and as of last week, all are laying. Dick built their 5 star coop just before I started chemotherapy in the fall of 2012 and though we did not actually get chickens until the next summer. Andy and I chose badly and we got a few roosters. But we ended up with two hens back then. One of them now lives with Dick's wine kit shop owner, Cheryl and the other died. Last summer though the idea of having more birds became a reality and though we again had a few rooster issues I am happily the "mom" of 5 different breeds of chicken. It has become a bit of a passion for me and I have books, belong to a couple of Internet chicken groups like "Canadian Mother Cluckers" and am constantly amazed by the behaviour of our flock. They each have an individual personality and that old adage of the pecking order could not truer! Next up may be bee keeping as it looks as though a master bee keeper thinks I may be serious enough to teach.

I believe that the passion for learning about and keeping chickens and perhaps bees later this year, is something that not only interests me but allows me to learn quite easily, not always the case with the effects of memory and attention loss after chemotherapy.

One more thing~~my concerns about climate change have not waned and as I get older and know there is no knowing about the future I am no longer hesitant about what I will do to protest pipelines in British Columbia~~it will be over my dead body. 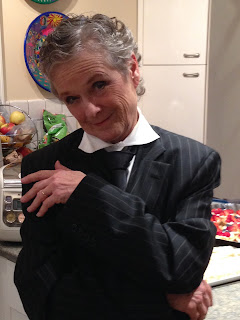 Academy awards night~~can you imagine this as the Danish girl, played by Eddie Redmayne? 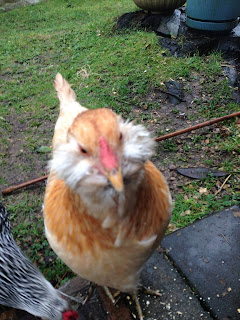 Blue, so named for her blue eggs and head of the pecking order 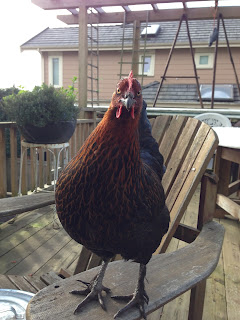 Charlie, next in the pecking order and up on our deck for a visit 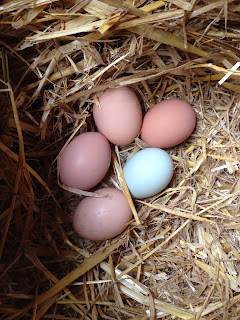 Last week, the first day we had all 5 hens laying

Posted by Marian Leighton at 3:37 PM