In reading my last post just now I was glad to see it had not been as long ago as I had thought. It was good to go back and read the posts from last year. It makes me appreciate the fact that I have been able to carry on with my active life. The third anniversary of my breast cancer was last week and while it seems long ago, the reminders are still with me.

I read my journal posts from the past year before starting this post, in part because my memory is not always as accurate as it used to be. I continue to blame much of this on chemotherapy since I just do not believe it simply aging. But it was good to refresh my mind and I am glad that I continue to keep journals, even though there is the odd lapse. One of the issues I have noticed is that there have been continuing issues of depression and anxiety. More on that later.

I did return to Nepal last fall for yet another Annapurna trek. It was a small but diverse group and though we were fortunate to have a clear day for our sunrise hike to Annapurna Base Camp, most days ended by early afternoon in rain, hail, thunder and lightning. On our descent nearing the end, we experienced torrential rain and wind that had started the afternoon before. It was not until we arrived in Pokhara that we heard that the storm which came across the Bay of Bengal, had been far worse further east and higher up. Many Nepalis and trekkers died in that storm and again we witnessed the changing weather patterns of the world. Soon after our March Nepal trip also in 2014, 16 Sherpas died on Mt. Everest. Both disasters were in seasons that in the past were considered the best for trekking and climbing. I digress, but it seems to me that it is becoming harder to deny that climate change is upon us throughout the world and we will see much worse if we do not recognize and together make some hard decisions.

One week after returning from one of the most challenging treks since the Everest Base Camp trek in 2008, I have been reflecting on how far I have come since my breast cancer diagnosis just over 3 years ago. I never finished the blog post above and considered this morning on deleting it. However it  does seem relevant and so will carry on today and hope to actually finish this post many months after the last epistle.

First, though I know "winter is coming" and often depression can be exacerbated by short days and long nights (nights have often been very dark for me) I feel better equipped to handle it. I reference depression and anxiety above and acknowledged that in June when I reached out for help initially with my medical oncologist at my bi annual meeting with her. I still see her twice a year because I continue to take Anastrozole, an aromatase inhibitor that remains the biggest "gun" against a recurrence. This drug has many side effects but the reality is that I have no choice but to take it for at least 5 years. Sure, there is always choice but since my tumour was strongly fed by estrogen, the AI as it is called, inhibits the uptake of estrogen and I do not want to look back and see that I chose not to use the only real tool against recurrence.

Possible side effects of Anastrozole include osteoporosis, muscle pain and weakness and the list goes on. It did not occur to me that my depression and anxiety could also be connected to this drug but I feel that there is a distinct possibility. By acknowledging my concerns in June, I did receive help and with a one to one MBCT course (mindfulness based cognitive therapy), very similar to the MBSR course I did in a group setting back in the spring of 2013, I was able to slow down and practice mindfulness yet again. With advice from the wonderful psychiatrist I saw back in 2013 and then again this summer, I also added a new medication to my arsenal. I join the many voices who speak out about depression and anxiety whether it be situational or chronic and am thankful that I sought help.

By the time we left for Nepal/Bhutan and India in mid September, I felt a renewed balance in my life. While away leading the very challenging trek in Bhutan followed by a tour in India I was so busy that I had little time to consider how I really felt. What I did know was that again, despite inclement weather in remote high altitude trekking, I felt good. I love being in the mountains and though I do not plan to trek in Bhutan again, I know that with my good buddy and colleague Razzu Tuladhar (owner of samsarajourneys.com) who I have now been working with for nearly 12 years, I will still be trekking in Nepal in the near future. With the knowledge that I have introduced so many people  to trekking in the Himalaya, all of whom have realized new potential, I am grateful that I have had these opportunities. It also allows me to inspire many breast cancer sisters to reach beyond what they think they can do.

In closing this long post it saddens me to add that I lost more friends in this past year to breast cancer. Other friends lost close friends and family members to both breast cancer and other cancers. None of us is immortal and trite as it sounds, it continues to be important to value what time we have on the planet. Here in Canada, where a long election ends on Monday, I and many others hope for change. I referenced climate change earlier and no matter what the outcome on Monday, I know that I need to engage further in making a difference not just for our next generation in Canada but for everyone across the world. 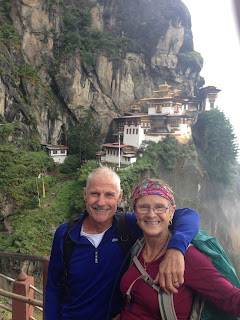 Dick and me just below Takshang Monastery, also know as Tiger's Nest. 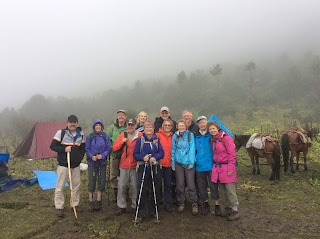 Our amazing group the last morning~~what a team we were! 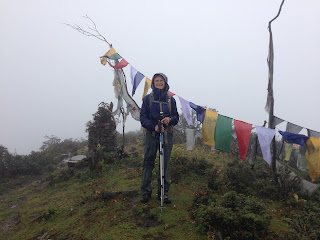 Me at yet another pass~~probably 4100+ meters high. 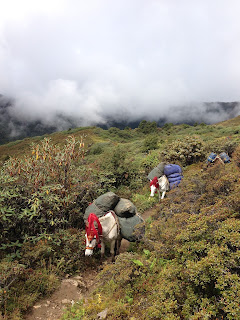 Our amazing horses and mules who carried everything needed for the trek. 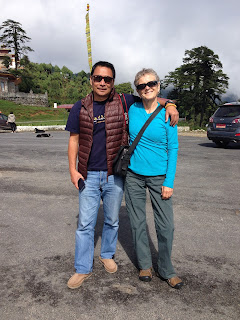 My colleague and good friend Razzu at Dochula Pass, Bhutan.

Posted by Marian Leighton at 10:54 AM