The summer is flying by and it has been almost two weeks since the last post on my Cancerversary. I am amazed yet again how much stress built up while I honestly did not realize it was happening. I thought that initially my shoulders were sore from positions held in a yoga class one night awhile ago. But then my head hurt on almost any movement. I knew it was not a brain metastasis (yes, these thoughts do go through my head) but I was unable to make it disappear.

I did do the short course triathlon July 28 with Andy. Karalee decided to do it in her own time which is much faster than mine. I was definitely nervous but the swim in the 50 meter UBC pool went well and the water was warm. Andy cheered me on at each turn and apparently did dolphin dives behind me as it was pretty slow for him. The bike section was going great until I lost concentration for a second and went down on the road. Andy checked out the bikes and just like those guys on "The Tour," I got back up and carried on. Adrenaline is a wonderful thing as we did the 5 k run/walk part in better than usual time. I did do some damage to my left arm/shoulder~~thank goodness I fell on my left side, not my breast surgery side~~but I am getting physiotherapy and look forward to the next triathlon. It was so worth doing!

I went off to Bowen Island the day after the triathlon for a few days in a rented cabin on the water~~totally private and with a fabulous view. Mary came over for the last couple of days and we even climbed Mt. Gardiner with a friend; 800 meters of elevation gain and about 10.5 kilometres. We also hiked around Killarney Lake but much of the time I did try to relax. I did not sleep well though and  am well aware that I still like to be close to home right now. Andy and I went to Vancouver Island last weekend so he could do a competitive triathlon at Elk Lake. It was fun to be up close to such an event and cemented my desire to do more short course triathlons myself.

But back home, my head hurt more and I felt exhausted again. It was painful to even move my head a tiny bit. Luckily the two physio appointments I have had this week have provided some relief and now I just have to figure out how to control the stress that has built up.

Blood work done recently for a baseline show some abnormal results and it brings home again the fact that I am still recovering from chemotherapy, surgeries and radiation. Much as I would like to think that I am back to "normal," it will take time and patience. My newest injury from the bike fall has made me realize that I need to be patient and in time, I will feel more like my old self. 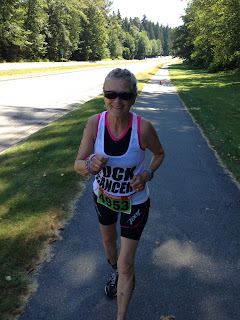 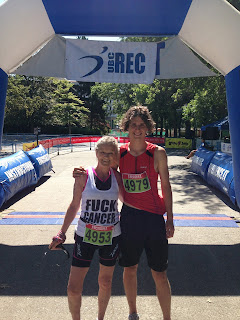 Posted by Marian Leighton at 10:31 AM