My old friend insomnia seems to have returned for a visit so I am again writing in the very early morning hours. I just read my last post and noted that I blamed stress for my neck and head issues. I am not so sure that is the case but I do see how easy it is to fault myself when in fact it may just be all that my body has gone through. In a report written in July after I saw my radiation oncologist for the last time, he chalked up my head pain to tension headaches so I guess I inferred that my stress caused the head pain. But two weeks ago, when I could barely move my neck without pain in my head, I went to urgent care at UBC. X-rays showed nothing so a CT scan of my head and neck was ordered. The good news is that there is no arthritis, disc problems or metastases. Incidentally as they say, nodules were seen on my thyroid and an ultrasound was recommended.

Friday morning I saw Paolo my amazing physio for the first time in a month~~he had been on holiday~~and his initial assessment is that my right side has really tightened up and it would appear that   radiation really did a number on the whole surgical area. This may be the cause of the neck/head pain. He also had a look at my left arm/shoulder injury from the fall off my bike. Some tendonitis and bursitis  with rotator cuff involvement but it should heal fine.  He suggested lots of walking, stretching and yoga and he will be working on both sides in the coming weeks.

Friday afternoon I had the thyroid ultrasound at Mt. St. Joseph Hospital and really did not think much more about it over the weekend since the little I read about thyroid nodules said that they are common and for the most part, are benign. Then on Sunday I noticed a small pea shaped lump on my mastectomy/tissue expander side, right below the scar. That was more unsettling but I did try to tell myself that it is most likely just scar tissue and besides how could cancer reappear when I just finished radiation in June?

No doubt my thyroid will be fine and the lump nothing to write home about but let me just say that the old fears from last summer's waiting games have resurfaced. Because I was discharged by my breast surgeon from the Rapid Access Breast Clinic at MSJH in June, I had to start over Monday at my GP's office with a new referral to have the lump looked at. I had just got home from that visit when my GP called to say that she had received the ultrasound report and two of the thyroid nodules were bigger than 1 cm so need to be biopsied. By this afternoon, an appointment for the biopsy had been booked for Sept. 9 and an ultrasound for the lump will be done Sept. 6.

I also had a suspicious looking mole removed from my back today though I am sure that will prove to be nothing. But I do feel as though I have still not escaped the never ending rounds of appointments and September does not look much better. Dick's Mediterranean adventure is going well and he and his crew Dean and Marie are currently in northern Sardinia. I decided some time ago that September was too soon for me to consider joining them and am relieved now that I made that decision.

http://sailvankedisi.wordpress.com/author/sailvankedisi/ for anyone who in interested in that adventure. Regardless of what is happening here, I am so happy that he is living his dream right now.

Now Thursday afternoon and the fall monsoons seem to have started early. I picked up our two chickens who had spent a few days back at their old home while one was treated for an eye infection that seemed to have come from the flock there. I had been treating her myself but when the flock was to be treated with oral antibiotics we decided to spare me a few days from my new job as chicken opthamology nurse. Her eye is better and they seem happy to be back in their deluxe coop. Our middle child Steven is packing our car to move back to Victoria with his girlfriend to do one last term at UVic to complete his degree. Andy is taking them so a whole night to myself!

I wish I could say that I feel as though I am on the road to recovery but it is not so. Still, as always I know I am lucky to be alive and with nothing life threatening. I am rethinking the CIBC Run for the Cure October 6th. I had thought I would be cruising the Med by then but that is looking doubtful. The fact that only about 15% goes to actual breast cancer research etc. frustrates me but I suppose that even 15% is a good thing and it is an amazing event. We still have our Ne-Pal t-shirts from last year too. 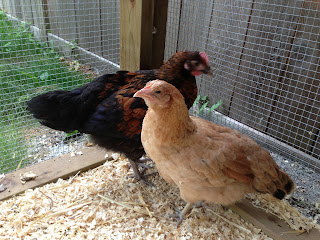 Fluffy and Fatty, named after a couple of goldfish the kids rescued when they were little from a pond on the golf course in Dhahran, Saudi Arabia. Fluffy is the light coloured one and Fatty may yet turn out to be a rooster.
Posted by Marian Leighton at 4:54 PM