Yes, I am dying of metastatic breast cancer. I was quite surprised myself when I found out, especially since a CT scan done November 27th showed no progressions. That same day I had my fourth and last session of BCCA Music and Art Therapy, and found it hard to complete. When one has MBC (metastatic breast cancer), often we blame ourselves for not having the energy to complete a project. On the 4th of December I spoke with my pain clinic BCCA doctor and still did not realize that things were going wrong.

Early in the morning on December 17th, I had an MRI. The next evening, we got results that showed leptomeningeal disease (cancer in the brain), which leads to a fast death. I had been suffering from a light headache and occasional nausea for a month but chalked that up to psychosomatic illness. I  woke up on the 19th to nausea and vomiting and that continued daily. Thankfully I had started counselling before I found out. It has been the best thing I have done for myself in a long time, and for everyone else.

December 31st I went to the BC Cancer Agency to begin palliative radiation, and then was admitted to the oncology floor of the Jubilee Hospital in a special unit for palliative patients to complete the ten treatments of radiation. On January 8th, I came home to die. As I left, my radiation oncologist, a woman from Iran, said a few weeks to two months. I began to receive home support almost immediately and now receive it three times daily.

My whole family is here. Steven is here from Australia, in quarantine at a good friend's AirBnB. The head of the Island's palliative team has given exemption for Steven to visit on the deck outside with a mask on, and he will come to live with us in 8 days. Andy flew from Terrace on the same day, the 4th. And Mary has been with us for several weeks, taking on a lot of the care.

It was scary to hear the news at first and I became disoriented during the treatments and did not even know where I was during my time there. Thankfully I am better now at home though there is no question that my cognitive skills have deteriorated. 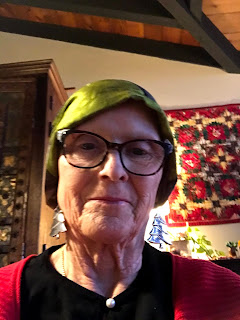 I took this selfie of myself wearing new self tied scarf sent by my cancer buddy Elderberry Dec. .25

Posted by Marian Leighton at 4:59 PM