ANOTHER HOSPICE STAY DURING COVID-19

Tomorrow will be Mother's Day in Canada and despite it being a Hallmark holiday it does allow me to think about all the years I've been a mother and how much  I have loved being a mother. I think about my three kids so often and right now it is bringing tears to my eyes not only because of how much I care about them but also how much I want to see them continue to grow.

This is not how I meant to start this blog post but it just flowed. David who is Mary's partner  got us started watching the home videos that Scud Green,  an  Aramco brat  put on DVDs  for us several years ago. We had never watched them since we got them and I'm so glad that they came out. It brings all those memories back and even makes me feel that I was a pretty decent mom and know I still am.

As for me, for several months after the fall surgeries and illness that they caused, and for several months post chemo I felt better and better.  My hair started growing back in, I gained back the weight I had lost and we even went on a winter holiday to Roatan so that I could be warm and snorkel on the second largest barrier reef in the world. That was in February and we arrived back in early March to COVID-19.  Even so I came back happy, appreciating everything around me. With our early spring in Victoria, cherry trees were already blossoming and camellias, azaleas and rhododendrons were getting started. Flobi and Jake our decade old cats were so happy to see us especially Flobi who loves to sleep with and even on me.

Around the middle of March I started to feel the old stirrings of pain from my right scapula radiating to  my shoulder and down my arm into my hand. Because my pain pump had worked so well  for almost six months I chalked it up to COVID stress.

On March 31 I ventured out of self isolation (being an honest vulnerable senior whose family says no going out other than to the garden and for walks) to have an MRI that had taken three months to organize. The hospital system could not understand how I could not just turn off my embedded pain pump for the duration of the MRI.  Somewhere during the wait I heard that my SynchroMed II would turn off as the MRI got going. For anyone who has not had an MRI, lying perfectly still for an hour or more is hard enough so I had taken Ativan  prior to the  scan. The pump did turn off but what I had not anticipated was pain ramping up in just an hour. It should have dawned on me then that I was seriously dependent on the pump. I had to go straight to the pain clinic anyway to make sure that the pump had come back on which indeed it did and also to help my pump filled. I asked to have the dosage increased, still thinking that perhaps the decrease awhile back was a mistake.

By this time I had been able to go nearly 4 weeks without a fill but two weeks later I dropped into the clinic saying that my pain had increased further. It was decided that I should have another increase right then and there.  I also had the feeling I was not using my PTM (Personal Therapy Manager for breakthrough boluses) correctly. I had never needed it up to this point and it was indeed defective and I had a new one sent express within two days, along with another dose and concentration increase. 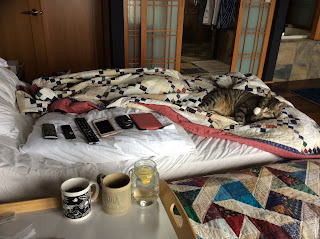 Second from right is my PTM. These are the gadgets that I have close by when I am spending a lot of time in bed.

On April 28 despite the boluses that morning I could not control the pain and it really scared me. Once I got the pain under control just enough to make a phone call I called the hospice* to see if they could help me. With a brief explanation the nurse pulled my file and said she would call me back. Because they were able to pull my file and talk to a doctor and nurses there, they told me they would look into it and call me back. Within 10 minutes she called and told me they had an acute care bed  available and it was felt by the staff there, that for my own safety I should come in. I needed to be there ASAP.  Car vibrations have always increased the pain when it is exacerbated and I did suggest that Dick should try to hit every bump. Yes, sarcasm and luckily the hospital where my hospice is located is only a few minutes away from home.

Soon it will be two weeks of investigation including a CT scan and another MRI to make sure that the tip of the catheter that goes up my spine was in place and had not been occluded. With no other real alternatives I was switched on Thursday to the most potent opiate in the world,  Sufentanil.*  Its big claim to fame is that it is 1000 times more potent than morphine.  This hospice is amazing and my team is unbelievably knowledgeable. Everyone is fully aware of what I'm going through and in a way that is a good thing that I had  the weekend so we could see how I did on the new drug.

My doctor who is head of the hospice likened my situation to someone on dialysis. Without dialysis life would not go on. For me without my pain pump I too would not be able to go on. This analogy is real as I am now grappling with it. There is no question that  for now I want to live despite the fact I may never be active again. That s a hard pill to swallow but for now I  definitely want to  live. 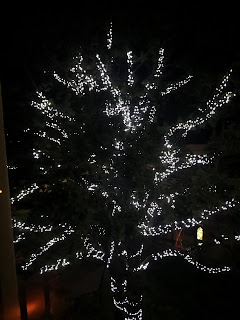 Outside my hospice window there was a large and very old Garry Oak tree. It was lit each night and before dawn.

Tuesday May 19, 2020. If there is any confusion because you saw this earlier and it has changed a bit, I went to write a Part II to this post and noticed that parts were missing. I think that I went back to edit something and forgot to publish again after I had saved the changes. Being on drugs probably does not help!
Posted by Marian Leighton at 9:59 AM