Much thought goes into the beginning of a blog post for me and it usually there has been a reason for reasons for me to want to speak up. In the 7+ years since my first breast cancer diagnosis the roller coaster analogy is never ending though the ups and downs do have those plateaus where you catch your breath or the ride comes to and end. Unlike the roller coaster, once we are faced with metastatic cancer, stage IV or simply cancer that will never be cured, it is difficult to banish thoughts of what's next or how long do I have along with facing the necessary details like wills and end of life plans. Of course we all have to face these things but somehow having metastatic cancer can make it more imminent.

Back to the purpose here. Christmas came and went and was wonderful. Soon after everyone returned to school I fell back into a trap that happens once in a while. When this happens I find myself wanting to know more about my stupid tumour or the blob as I often refer it as. No matter how unreal it is, I want to think that there must be some way to attack and release the tumour. In early January I saw my family doctor who was sympathetic and sent me off to a plastic surgeon that I had seen before. But of course she said again that there is nothing that can be done. She had sent me last year to the best team in terms of surgery but once they saw the scans they said it was hopeless. I guess I buried it in my mind and had to hear it one more time. I cried a few tears, went home and called M.D. Anderson in Houston, Texas one of the two preeminent cancer centres in North America. After several telephone calls I was sent a package. If I wanted to have my case looked at by an assessment team I needed to send every single scan from the beginning plus just about every document also from the beginning. The cost of the team looking at my case would be US$16,000 to 32,000. We had called our insurance company and they would have paid for the second opinion. It only took me about 24 hours to think it through and know that it was really not worthwhile. The plastic surgeon also gave me names of two doctors in North America one in Toronto and the other in St. Louis who do brachial plexus surgery. I have pondered making phone calls but the reality is that no one will touch a tumour  entangled around the neurovascular bundle of the brachial plexus. Chances would be good for bleeding to death or losing all control of my arm. My oncologist says it is very common for patients to go back every once in a while try and find a way to make it all better.

Once I got over those few days in January my positive self emerged and I started yoga, exercise and meditation classes at Inspire Health again and decided to get some counselling. It is helping.

Here is a little excerpt from my journal which I planned to add to this post.

Sunday March 3, 2:17 PM lying in bed feeling very weak and suddenly a bit afraid. This is going into a  blog post but I will try to encapsulate my feelings around my health and how it has been for the last couple of weeks. The brachial plexus infusion which was nine days ago has done nothing in my estimation. I am feeling more pain now. Scary again.

So what are the things that are of concern with my metastatic breast cancer right now?

Continuing pain which is manageable as always with narcotics. So not a big deal? Yes or no? It depends on the situation and the timing.

Mental status. This one goes up and down and sometimes on an hourly basis or worse. But also it can be brought it on after several months of seeming normalcy.

Activity level. This one is very difficult to describe. I am sick right now well into week 2 on a cold and cough very productive with green phlegm. I feel as weak as I have ever felt well maybe not as weak as when I needed blood transfusions. But this is a weakness that I do not like but am getting used to at this point I guess.

Scaredy-cat level is at one of the more highs than usual.

March 9th, 2019. I had an MRI last Saturday night and I had a CT scan Tuesday morning along with the usual bloodwork and then chemotherapy on Thursday morning, the third Thursday in a row. Along with Paclitaxel I get Dexamethasone which is a steroid to ward off any allergic affects of the chemo drug. Mary was in a session called "Tremendous Trees" that was part of Ideafest at UVic this week and one of the things she learned is that Taxol drugs (Paclitaxel being one of the Taxols) originally came from the yew tree. That was kind of a fun trivia fact I was aware of, having had Taxol back in 2012 but it was interesting that she learned about it from a session on tree research. Hey this is one of the positives of having breast cancer~~ we learn a lot. I must add that allergic reactions come from the fillers used, not the Taxols themselves.

Back to chemo day. Then I get Benadryl, another allergenic drug along with Ranitidine in case of nausea. The dexamethasone and the Benadryl fight each other so I feel wired but tired. Usually I come home feeling a bit weird but also energetic. This week not long after chemotherapy I decided to do some pruning in the garden after Dick and I had gone for a walk. I pruned my way up to the road and tried to get up from a sitting position. However with only one arm/hand working and weak legs I managed to throw myself onto the roadway. Tripping and falling have become quite common no doubt due to medications, chemotherapy and stupidity on my part. Icing, Ibuprofen and bedrest seemed to do the trick and gave me time to work on fundraising for today's event.

That was Thursday afternoon and today as many of you know I walked 5 km with my special little team called "Breast Cancer Eh?" Dick, our daughter Mary and her partner David joined me on Inspire Health's major fundraiser of the year. Inspire Health provides cancer patients many resources such as counselling, yoga, individual exercise routines, nutrition planning and more. All of this is free with money coming from a grant and this big fundraiser today.

It was only Wednesday while lying in bed that I decided to form a team and get the word out to my friends all over the world. The response was heartwarming. Today was a beautiful day in Victoria, relatively warm (6C) with no wind and I actually managed to walk the 5K, something I did not think I could do. I have to throw in the fact that we came 5th in team donations.

I have left the best for last. My oncologist phoned late yesterday afternoon with good news. Both the MRI and a CT scan appear to show stability with no signs of progression.

Maybe there is another trek in me yet but I have a long way to go on strength and balance. For sure I am feeling positive.

Love to you all, 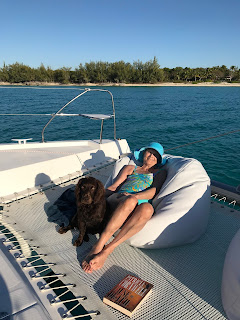 Relaxing on Dean and Marie's catamaran in the Bahamas in February. 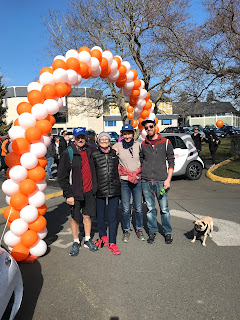 Dick, me, Mary, David and Franny the pug today at the end of the inspire Health 5K walk.

Posted by Marian Leighton at 7:30 PM