PROGRESSION AND HOW IT IS AFFECTING ME.

After writing several posts without publishing I am hoping that I  can form the words I want to in order to explain my hesitation. When I last posted I it was about the main events that can cause stress in our lives. That post spoke about how the move created stress in our lives.

The second stressor for us falls into the category of a "major illness or injury" When we/I bought our Victoria home in January, 2017 with possession in June I  had no idea that I already had metastatic breast cancer. We took possession June 20th and I returned to Vancouver on June 25th for removal of my implants. I really did think the problems I had had with my reconstruction much earlier and then with the second try for reconstruction in December, 2016 were part of the problem. Not so and two months later I was diagnosed with metastatic breast cancer. Fast forward one year and that metastatic cancer has progressed.

I feel lucky that this progression was found. The reporting of an MRI I had in June during my stay at the Victoria hospice for pain management showed stability. Fortunately my wonderful oncologist sent  the June MRI for review by the wonderful head radiologist in the Vancouver cancer agency. He had followed my testing last summer and also did the core biopsy which led to the diagnosis of metastatic cancer. With both MRIs, he was able to compare this new one with the diagnostic one from last year. Sadly it showed a lot of progression as well as some hot spots.

Last week I had a full bone scan and tomorrow I have a CT scan. In November I will have another MRI. Of course I hope that there is no change. The day after we knew there was progression, I was taken off the wonder drug Ibrance. Its purpose was to stop the multiplication of cells. After one year on Ibrance I am now on chemotherapy.

By the time the progression was found the pain had become excruciating despite a change to methadone. I have another narcotic for breakthrough pain and I would often find myself taking it five or six times a day. While I was in hospice I had a consult with an anesthetist who specializes in nerve blocks. I have had two Stellate Ganglion blocks so far and my pain has decreased significantly. However it is short acting so it must be done every 2 to 3 weeks. I am hoping for a block that is more invasive but is long term. My doctor has started the application process but it is very expensive and must be approved by the cancer agency and it is dependent on their funding. Also they must find me to be credible candidate.

I have no use in  my right hand and gradually the action in my wrist is diminishing too. One of the side effects of the chemotherapy affect the extremities and as I understand it, the toxins pool there. The bottom of my feet are bright red and painful but with the help of another woman in my metastatic support group at the cancer agency, I got ahead of it before any cracks or blistering occurred. I soak my feet several times a day in lukewarm water and apply a special cream that my friend brought me. Unfortunately it has affected my left hand and I have painful cracks appearing under my nail beds.

These side effects are more annoying than anything else but they make me feel useless and everything takes twice as long. However as in most of you know, I am not one to give up and I am often as busy as I was before.

This second stressor of a major illness has created frustration for me and I do wonder what is next. I know that I am not always easy to live with and it is difficult for both of us. I need more help which is hard to ask for as I have always been independent, again something that most of you know about me. Dick is not captain of this ship, but for five years he has been in sole charge of our catamaran Van Kedisi, often for several months at a time. Now that he and the boat are home I think it is hard for him, especially as he would have preferred to live in our old house in Vancouver. To come home  to Victoria to a house that he did not choose has been very stressful for both of us. He keeps saying that this transition will take time and maybe years in fact but for me, I do not know if I will be around when he finally settles here.

Metastatic breast cancer is different than breast cancer where we can hear that we are NED or no evidence of disease. The best that those of us who have metastatic breast  cancer can hear is NEAD or no evidence of active disease.  I am not at that point and I do believe that I will live for many years.  However It would be easier to live with my cancer with both of us on the same team. On a positive note, I do feel that it is possible but it has been important for me to write this post even though it has gone through several iterations.

Below, I have added some photos of our wonderful family and friends. For the most part as you can see we had a wonderful summer. If I find a computer friend soon I will put the photos into a better scenario and also add names. Meanwhile, it is fall and fall is my favourite season. I wish you all a wonderful fall too. 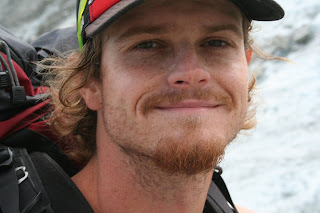 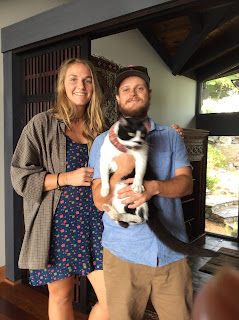 Our son Steven and his partner Heidi. 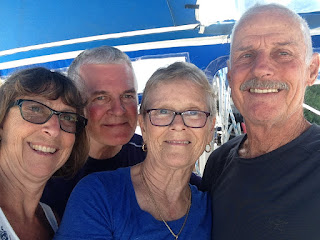 Patti and Lyle with us on an overnighter on VK. 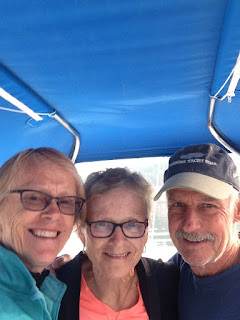 Our good buddy Suzanne on VK~~she crossed the Salish Sea with Dick at the end. 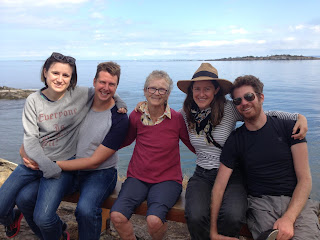 Honeymooners Kath/Alan and our daughter Mary and her partner David with me on Saturna Is. 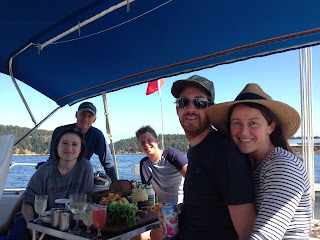 Honeymooners with Dick on VK. 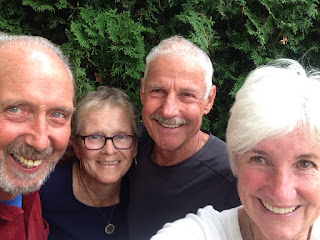 Our wonderful friends Fred and Shelley who I have known for 40 years! 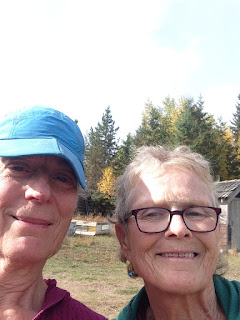 A selfie with the most amazing farmer I know. 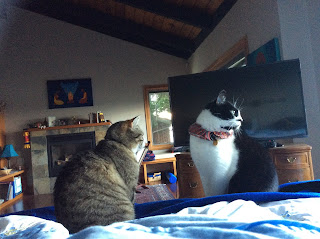 I  cannot say enough about the cats of our lives, Flobi and Jake. 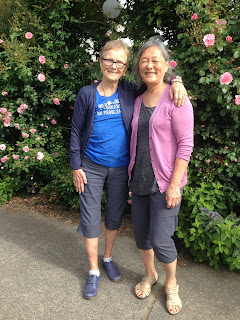 Elaine and me~~so lucky to have her in my life. 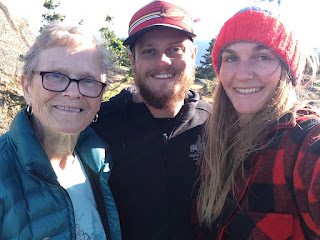 Steven and Heidi with me. 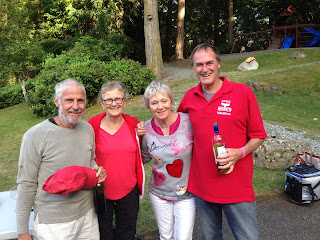 With super sailors Jane and Russell who we have known since our kids were toddlers. 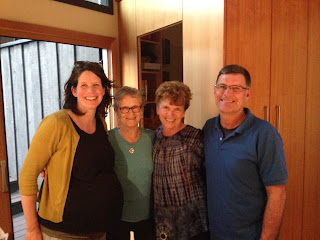 Jana not long before twins June and Iona were born with old Saudi friends Marie and Dean.
Dean sailed the last leg on VK and Marie flew to meet the crew from Wisconsin.
She also sailed legs on VK. 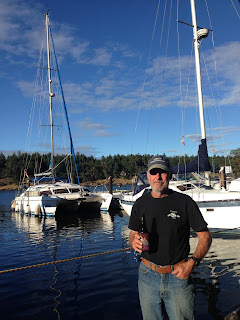 Captain Dick on Saltspring Island 4 days after he made landfall in Victoria. 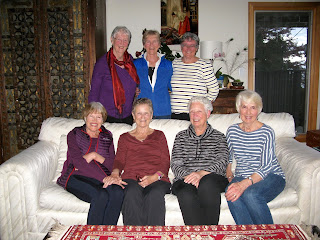 My wonderful yoga/hiking buddies from Vancouver. They came to Victoria for a 3 day reunion.
From left at the back~~Brenda, Wendy W and Wendy H.
Front row~~Claudette, Marian, Mary and Diane.