It is now one week into 2018 and this will be my first post of the year, a year that I look forward to. The days are already getting longer which is a bonus for me especially when what I call sleepathons reappear every month. Towards the end of each cycle of Ibrance, fatigue inevitably hits and I am thankful that I do not have to work or get up early in the morning. Setting my alarm wakes me up but only long to hit the snooze button and eventually turn the alarm off. The cats get me up, but only long enough to feed them and open their door. Nine hours of sleep becomes 10 11 or 12 as it was today. However by the end of this week I will have had time off the wonder drug Ibrance and the cycle will start again.

Over the New Year's holidays I spent five nights in Vancouver couch surfing, albeit with good friends.  I was there to spend time with friends we have known for decades but in recent years have grown closer to. Travelling and trekking together can do that to you~~ sleeping in tents in the high Himalaya, touring in Indian buses through Rajasthan, hiking in the rain in Haida Gwaii, this intimate time together can make or break friendships I think. However in this case our friendships have only grown stronger. Having metatastic cancer is no picnic but what our friends are going through pales in comparison. Our friend has been diagnosed with CJD, or Creutzfeldt-Jakob disease and his wife is suffering along with him if not more. It is a rare degenerative and invariably fatal brain disorder that affects about one in a million world wide. Because it is so difficult to diagnose much time has been  taken to find out what has dramatically changed a strong, intelligent and caring man and I wanted to spend time with him and his family before the inevitable will happen. To me this is a tragedy and despite the support of family and friends it is indescribably sad.

It had not been I my intention to write about our friends in this post but something compelled me to do so. Being diagnosed with breast cancer twice in five years pales in comparison to what the disease CJD does. Friends and family rally around and we will continue to do so.

My intention is still to give an update and there will be some humour in it~~at least I hope so. I continue to mess around with pain management. I asked for and got a new pain doctor at the cancer agency because I felt that the previous doctor and I were not on the same page. Just before Christmas I saw the new doctor and she was receptive to what I have been considering. My tumour remains stable, at least it did at the last CT scan. The scan will be repeated in March. Meanwhile the the nerve pain continues predominately in my hand but when I have those sleepathons and miss the timing for my pain meds, I know that the pain is still in my arm and shoulder. Opioids will be in my arsenal for the foreseeable future but I hope to use medical marijuana as a co-analgesic. I am just at the beginning of the experimental phase of this. Apparently for nerve pain CBD's alone will not do the trick and some THC needs to be included. Ingesting pot via tinctures or sprays takes time to go through the system and I have found so far that it is inadequate.

During my time with the friends over New Year's I had discussion with one of the sons-in-law about smoking dope. He gave me a little bottle of homegrown and we discussed vaporizing versus smoking which I do not want to do. I bought a vaporizer a couple of days ago and unfortunately had no teachers here. I wish I had a video of me watching YouTube videos for my particular device. In most cases the presenter appeared to be stoned himself. I laughed out loud watching one reviewer completely panning my vaporizer with the second video later when he was not so stoned saying it was actually a good device. With the vaporizer I also bought 3.5 grams of Medi-Haze and probably wasted some while thinking there had to be some smoke. Once I figured out how to use it, I inhaled some of the vapor late in the evening the last two nights. Maybe it was because I was by myself, but I did not feel the anxiety that smoking dope has always created even when I was a hippie decades ago. I slept well both nights and to be honest I think that it did help with pain. Here is the link to the YouTube video I referred to. It did make me LOL.


The night I bought the vaporizer but before I had experimented with it, I got an email from the  dad of one of my kids friends, explaining that he had intractable pain and his daughter thought maybe I could help. Well, I just may be able to but he will have to go also for the first time go to a pot shop. Thankfully marijuana will be legal in July of this year in Canada. Unlike the United States this is a federal initiative. Sadly Jeff Sessions likens marijuana to heroin so those states that it is legal in are now having to rethink. I wonder if his boss has ever smoked marijuana.

On an even lighter note I have a criticism of the new low flow toilets. Those of us on drugs for breast cancer including chemotherapy IV or oral,  plus the pain meds many of us are on, find that they wreak havoc on our bowels. When you plug up the toilet in the middle of the night while coach surfing as I recently did and the plunger is stiff and your right had does not work, what are you to do? I shut the toilet lid, found a piece of paper and a pen and left a beware note. Luckily no one was home when I sneaked out the door the next morning.

That's it for my first post of the year. I hope to be more kind and compassionate this year and to listen more. This second go with cancer has me happier and I am not sure why. I will explore this before my next post.

Love to you all, 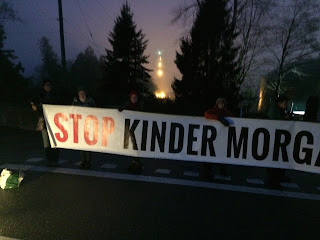 I continue to oppose Kinder Morgan and was protesting pre-dawn last week. I have the orange parka on. 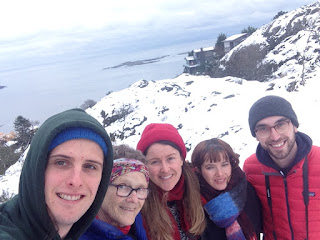 Christmas Day with Andy, Mary and my niece Reilly and my nephew Jordan

Posted by Marian Leighton at 7:22 PM