Yesterday I decided it was time to post an update after months of procrastination. I had been at least posting annually but this year when that time came I was beginning a summer of uncertainty which covered the period of time from early June to August 22.

2017 had already been a busy year. In December my breast reconstruction that had been causing all kinds of problems like cording and contractures, was redone. In early January I bought a house in Victoria. Though I had been looking since the previous April, one could say this was impromptu but the moment I entered the house, I knew it was for us. After a Skype call with Dick I made the offer on January 7th, went back for inspection January 11th and spent all week getting our Vancouver house in order for listing. Saturday, January 14th, one week after buying our new home, I flew to NZ to spend two months with Dick.

Our house in Vancouver sold March 14, two days after our return. Next was my planned swan song trek to Mustang (real name Lo Manthang) in Nepal with a wonderful group of 12 friends and friends of friends. I had been saying I was ready to retire for 5 or 6 years but I really felt this trek wold be my  last. While flying to Nepal, I developed my first lymphedema ever but was so busy with the trek that I did not really pay much attention. I had also had my right knee go out the night before departure but it always seemed that something unexpected happened on these trips and all would work out. It did work out and was an exciting and memorable trip from beginning to end.

On my return to Vancouver from Nepal in late May I was already scheduled for my 6 monthly cancer checkups as well as a post op visit to my plastic surgeon. We both felt that the latest reconstruction was failing and he agreed to take it all out. Meanwhile we packed and sold stuff and tried to downsize. We moved June 20th with the help of Steven who came home from Australia for a month and he was amazing, not only with the physical challenges of a huge move but I found that his people skills had grown so much. He was able to intervene when tensions ran high as can happen during a move! We had also hired a professional mover and he and his crew were amazing.


June 26th I returned to Vancouver for my surgery and Andy flew down from Terrace to bring me home a few days later. I had hoped that surgery would make some significant pain and nerve issues radiating from my scapula to my right hand disappear but nothing changed and these symptoms of something serious continued and in fact worsened. I was back and forth to Vancouver 6 times over the next few weeks for tests at BCCA and it became evident that the pain and nerve problems were part of something much more sinister than I could imagine.


The wonderful doctor who had followed all my tests at the cancer agency did a core biopsy August 17th and it was evident to me and my friend Suzanne who came in with me, that it was most probably cancer. He gave us both his cards and said to email him after 3-4 business days if I had not heard from my medical oncologist. I told Dick early on day 4 that I would wait until noon to email him, then I said maybe 10 AM and at 0810 I sent him an email. I simply could not wait any longer.

August 22 will be one of those dates that I will always remember. Of course we all have dates/events that are imprinted on our minds and not all involve us. But births, marriages, death and other significant events usually stay with us. My mother used to fax Dick close to our anniversary date so that he would remember. Odd that she not do the same for me! But half an hour after I sent that email,  the doctor called. Yes it was a recurrence of breast cancer. We spoke for a few minutes but he was already late for a meeting and said my oncologist would call.

The next day I impatiently waited for the call and finally left a message asking when this call would take place and soon after, on speaker phone with Mary taking notes, we heard the news. I had known it was probably cancer for awhile but never did I expect what she had to tell us.

My breast cancer recurrence was inoperable and incurable but treatable. A brachial neurovascular nerve bundle was entangled around the tumour on my chest wall thus the inoperable part. I have always felt that for me, there was a high chance of recurrence given the aggressiveness of my original cancer. But to be facing metastatic breast cancer was a big shock for all of us.

We had speaker phone calls with the boys and Mary was with us. This was exactly three weeks ago and I was surprised at how fast the cancer wheels were set in motion. For now though, I want you all  to know how important you are as I move forward in this new adventure. I do look upon it as that and hope to blog for a very long time. It is very difficult to have such uncertainty but as always, I am heading into this latest test with humour which I plan to incorporate into some of the future posts. 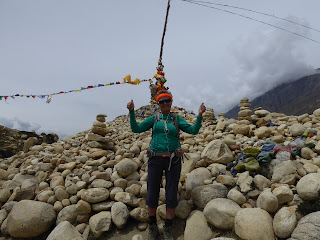 Posted by Marian Leighton at 12:52 PM