What a difference a year makes...

Admittedly I borrowed part of this title from a ham radio message Dick sent yesterday from our catamaran currently crossing the Atlantic. http://sailvankedisi.wordpress.com
As of the last message I received today, all is well and some challenges caused by weather and the autopilot going on strike have been handled and "Otto" is back at work. But Dick did say yesterday "what a difference a day makes."

For me, recollections of a year ago are dimmer but not gone. Chemotherapy had made me very sick and in the end I was hospitalized the first week of December, 2012. This year I feel pretty good and am excited at the project of surgery on Dec. 6th. That probably sounds crazy to most people but I am looking forward to finally having reconstruction. It will have been almost exactly 9 months since I had my mastectomy, 10 months since I finished chemo and 6 months since I finished radiation.

For those who read my summer and fall posts, you may recall that I had a few niggling issues. I would like to say that in retrospect that I think radiation was far worse that chemotherapy. Fatigue was and still is a side effect. It is possible that the lump I feel that I swallowing over is not those benign thyroid nodules at all but in fact damage done by the radiation to my swallowing muscles. I saw the thyroid endocrinologist recently and he said this was possible and we will just wait and see but sometimes it is super irritating to have what feels like a big frog in my throat! My head and neck are still an issue and I believe this was directly caused by radiation which led to scar tissue building up. No doubt the mastectomy and axillary dissection started that process but radiation certainly worsened it.  Again I have to thank my wonderful physio for continuing to break down that scar tissue in preparation for surgery next week. Also my acupuncturist has been working on my head and neck using electrical stimulus and I think that is helping too.

I still have numb toes and short eyelashes (at least I have some~~they fell out more than once) but my hair has grown in great and I even had a real haircut in October. It is quite curly and baldness is really a distant memory. 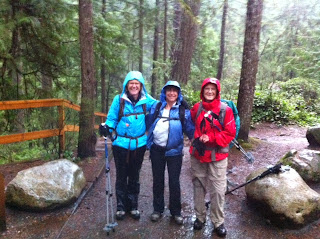 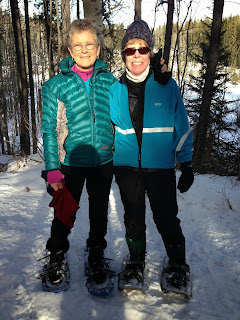 So I guess my message now is that even though I have some "cancer take-aways" as Peter and Anne, both who have had cancer of different sorts call them, I am alive and kicking. I snowshoed for the first time this season last week near Calgary with Wayne and Anne. I hiked the week before that in a monsoon on one of our local mountains with two friends who are coming to Nepal with me in the spring and we survived that just fine.

So the next post should be after my surgery next week and I hope to report that all went well and that I have cleavage!
Posted by Marian Leighton at 5:33 PM