Last July I booked one way award tickets for Dick and me to fly to Turkey. Our Prout 39 catamaran has been based in Turkey since 1997 and last year we finally made the decision to sail across the Mediterranean and Atlantic to the Caribbean. When we lived in Saudi Arabia, having a boat in Turkey made sense. We still love Turkey but now that we are back in Canada with the same northern hemisphere winters, it made sense to move our boat to a warm winter destination.

We took a course called "the psychology of cruising" last spring and I was able to shed some of my reservations about long distance cruising. Dick is the real sailor and has done ocean crossings as recently as 2009 when he crossed the Atlantic on a catamaran owned by friends. He has also spent countless hours preparing our boat for this adventure. It has been his dream for decades to sail part way around the world and I was "onboard" (pun intended) at last.

Two weeks after I booked those one way tickets, I found the lump. Even then, we anticipated that after my lumpectomy, radiation would follow and I would still be ready to go by spring, 2013. As we all know, plans change and in this case the our plans have changed dramatically.

So there are now two plans. One is my treatment plan and other involves Dick sailing from Bodrum, Turkey to the Caribbean without me. My plan takes me well into next fall and Dick's plan tentatively has him leaving Bodrum in July and arriving in the Caribbean in December. His plan requires that he find crew for all stages of the journey. Weather and the boat standing up to thousands of miles of rigorous sailing will also play a part if he finds his crew.

My plan is less tentative though with breast cancer I have found that there is no certainty. On March 5th I will have a full mastectomy, axillary dissection and the first part of a two stage reconstruction. Following surgery and healing I will have 5-6 weeks of daily radiation. This should take me well into June. With a minimum of 3-6 months after radiation, I will have the second stage of reconstruction. Ins'allah (god willing) was a word much used in our 18 years in the Middle East and we still find ourself using it. So ins'allah this plan will actually work out.

Both plans involve strength and determination and a possible separation of many months. I will also have to ask our good friends for a continuation of support that has been so readily been given.

Christmas in the Caribbean does sound good. Stay posted for updates. Conversations continue. 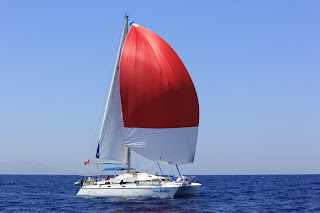 Posted by Marian Leighton at 10:57 AM