Chemotherapy and a room with a view.

Last week was not one of my happier weeks. I may have felt happy and grateful with a cheerful and seemingly positive outlook a few posts back. However #4 round of doxirubicin, aka the red devil and cyclophosphamide, aka cytoxin did a number on me.  Doxirubicin is actually red in colour and is so toxic that if it escapes from the vein it can actually burn the skin and tissue and in worst case scenarios, create the need for skin grafting and even amputation. The things we learn while getting chemotherapy! Of course we know that there can be serious side effects but we all hope they will be minimal. For me, as mentioned in the last post, the S/E were manageable.

Or so I thought. A few days after my 4th and final infusion of A/C as we call the combo, I started to feel vaguely unwell. We already knew that my hemoglobin had fallen to 92 after cycle #3, normal being 120-155. So the oxygen carrying capacity of my red blood cells was diminished and I understood why I was not able to keep up my 5 km walks at the same pace and I also found cycling on even the slightest incline to be tough. I jokingly said to Dick that maybe I could use some EPO. No joke, as the next day, my oncolgist said they had tried EPO to boost the hemoglobin of chemo patients but it had not worked. EPO is used is some medical circumstances as well in blood doping in cycling as we all now know, but it was not to be for me. If my Hemoglobin fell to 80, a blood transfusion would be considered.

I must admit to a night of reflection after hearing that news. In 1994, my father died from a massive respiratory arrest following a blood transfusion after chemo at the very same cancer agency I have my treatments at. For my father, from diagnosis to death was a few short weeks. Though my circumstances are very different, it brought back all the memories in a flood, including the night of his funeral when our youngest son Andy, just 19 months old, was hospitalized for a a very serious GI illness that he probably picked up on the long flights from Saudi.

Back to my feeling unwell. As the days went by after that last A/C infusion, small things that for a healthy person would not really even register, started to add up. Low grade fevers, diarrhoea, shortness of breath, tachycardia (elevated heart rate), strange changes in unmentionable parts, nausea and more. I  called the nurse help-line at the cancer agency Wednesday and was sent off to a drop in for a look at the unmentionables. An expensive cream was ordered and I went home to wait and see. Thursday I got a follow-up call from the help-line and waited for my pre chemo blood work Friday. Mid afternoon Friday a kind and compassionate doctor called with my blood results. Not only was the hemoglobin 82 but worse, my neutrophils which fight off infection were almost non existent. All those little ailments I had complained of all week now added up. The long and short of it was that I was admitted to ER at the Vancouver General Hospital for anemia and neutropenia. With that diagnosis, there was no wait at all--it seemed that they wanted me whisked off to a safe room immediately.

VGH being a teaching hospital, meant that within hours, I had been examined by no fewer than 5 doctors with more to come. Chest X-ray, ECG, blood draws, swabs, IV with antibiotics, in short, a septic workup. My only real complaint was that it felt like the north pole and by the time a bed was found for me 11 hours later, I had 10 blankets on me.

The good news at 0245 was that a room on had been found for me as the previous occupant had gone for a double lung transplant in the middle of the night! Angel, (yes his name really was Angel) my nurse told me get ready for the view once I was settled in bed. Wow, I only wish I had a photo of downtown Vancouver at night -- fully lit up, mountains in the background and with a huge red  Christmas tree complete with a gold star on top of one of the towers. I felt better immediately! By morning the sun was shining on the mountains and the view was even more incredible. Even the bathroom had a bow window allowing for views all the way to English Bay and UBC. Mary called while crossing the Cambie Bridge and ascertained approximately where my room was located, told me where she and her boyfriend Ross were on the bridge and we waved at each other as they headed to Whistler for the weekend. Sorry, but by the time I had Dick bring my camera in, clouds had drifted in. 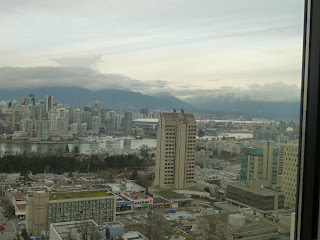 Meanwhile my hemoglobin had fallen to an all time record low of 65 which no doubt explained why I felt so sick. It being the weekend along with the disappearance of 4 tubes of blood destined for the lab, it took until Sunday for 2 units of red blood cells to be transfused. Monday AM I got a pass to go to my already scheduled oncology visit close by VGH. My blood results from an early draw that morning showed hemoglobin up to 92 and neutrophils also up to a healthier level. But Dr. Shenkier said no way for chemo as planned for today. She said no oncologist would allow chemo after what I had been through. So it is that I have a week's interruption and my first Taxol chemo is scheduled for next Tuesday. I have a week to recover and I suppose applaud the fact that I will no longer have Taxol #2 on Christmas Eve. I was discharged late yesterday morning.

The infection remains a mystery but this is common for cancer patients on chemotherapy. Coincidentally, I watched the show "Parenthood" last night on TV.  I had never seen the show before but had heard that one of the main characters has breast cancer. Well, last night's episode had Kristina admitted to hospital with dangerously low white blood cells (no doubt easier to explain to the masses than low neutrophils) which had allowed her to get an infection. Her Christmas Eve hospitalization was far more dramatic than mine of course, it being a popular TV drama but my view was far superior! I wonder what will happen to Kristina next week?


Posted by Marian Leighton at 2:48 PM