The Himalaya and Challenges

When I led a tour for 30 family members and friends to Nepal from Dhahran, Saudi Arabia in January, 2004 I never expected it to be the beginning of a long relationship with a man named Razzu Tuladhar and his family. Nor did I expect to find myself returning to the Himalaya over and over, often twice a year and in 2005, three times. It certainly never occurred to me back then, that in my late fifties, I would become a trekker. But during that first tour to Nepal which led us to Kathmandu, Pokhara and Chitwan, our eyes were opened not only to the beauty of the Himalaya and the limitless vistas of this mountain kingdom, but also to the amazing fortitude of its people, a nation of mainly Hindus and Buddhists. Razzu was in charge of our expatriate group, all of us coming from the "haves" of this world and he did his best to show us in the short time we had in Nepal, that there are many ways of seeing even the simplest of things. He opened our eyes just a little.

In November of 2004 I was back with yet another group from Dhahran and thus began my love affair with the countries of the Himalaya; Nepal, Bhutan, Tibet and Sikkim (once a kingdom, now a state in India). Though in the beginning I led just tours, my husband yearned to trek and I became an unwilling participant. I had never been particularly athletic, and though not a couch potato, the idea of trekking up hill and down hill at high altitude kept me awake some nights. Yet in March of 2007, a group of 14 of us embarked  on the Annapurna Base Camp trek. We were two families (both with our 3 kids each) and a few friends. Though we were actually unable to make it to base camp that spring due to late snowfall that had helicopters evacuating trekkers from high up, we still managed to complete a different circuit. To my everlasting surprise I became an addicted trekker and since then have led (I use "led" loosely as once my groups arrive in Nepal, Razzu and his team take over) treks to Everest Base Camp, Annapurna Base Camp, the Helambu and most recently, in May of this year to Upper Mustang near the Tibet border. I did find that first trek to be the hardest thing I have ever done and do consider each trek, no matter its level of difficulty, to be no easy feat. In part it is the challenge every time, not to mention the learning opportunities afforded, that keep me going.

Challenges. I think deep down that I have always enjoyed challenges. The trek to Upper Mustang in May was a real challenge. We flew from Pokhara to Jomsom to start our trek at 2720 meters and much of the trek has us climbing at altitudes of 3700 to over 4000 meters. For article/photo gallery of our Mustang trek: http://www.aramcoexpats.com/articles/2012/07/aramco-reunion-in-nepal-himalaya-trekking-to-upper-mustang/?utm_source=2012_07_+10_Newsletter&utm_campaign=May+15+2012+Newsletter&utm_medium=email

So from the challenge of the high altitude trek to Mustang in May, the next challenge turned out to be breast cancer. Although I did not intentionally train for this one, it turns out that the six years I have devoted to training for hikes and treks have possibly been the best preparation one could have. Over these years,  I lost weight in a healthy way, ate more of a plant based diet than ever before, and embraced yoga. In retrospect, I feel that I started this battle in July in excellent shape, both physically and in part mentally.

It is impossible to spend time in the Himalayan countries and not come away with a different perspective on spirituality. Though I have taken only baby steps, both yoga,  meditation and mindfulness entered my life around the same time I started my physical preparation.

I do consider the diagnosis and treatment for my breast cancer to be the biggest challenge of my life. I do plan to meet the challenge and will be trekking in Nepal in 2014. There is already a plan afoot with family and friends to do the Annapurna Base Camp trek in the spring of 2014. Even people who really had no desire to do this, have decided that life may be short and why not take a chance and do something out of their comfort zone. We had to cancel the ABC fall, 2012 trek but this will also take its place. I look forward to seeing the rhododendron forests of the Annapurnas in full bloom again; so many gifts ahead! 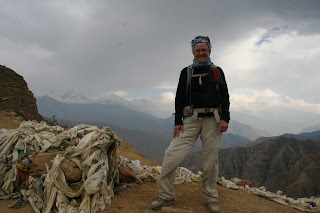 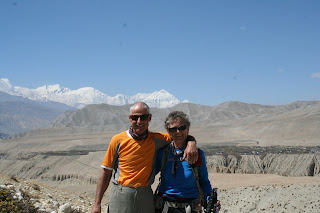 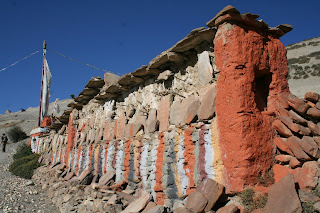 Posted by Marian Leighton at 10:25 AM